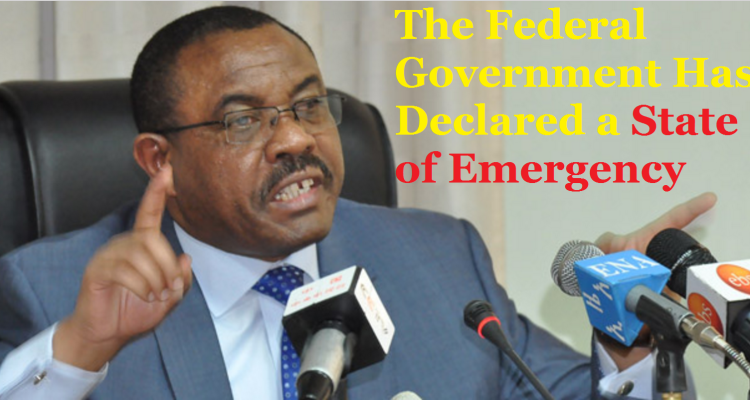 In the aftermath of 2005 election, the former P.M had violated the constitution when he arbitrary prohibited the people not to exercise various political rights including, but not limited to, the right of peaceful demonstrations and associations.

The current P.M has also violated the constitution before three or so months by ordering the Military to use “all necessary forces” to crackdown the ongoing protest without following the constitutional requirements of state of emergency.

Now, the regime has for the first time issued state of emergency. So far I have not seen the contents of the decree which make it difficult to give any legal analysis. Nevertheless, it is clear that the government issued this decree to legalize its awful actions that resulted in grave human rights violations. In addition to prolonging the duration of the regime, the issuance of the decree could probably be meant to provide a defense for government officials to exonerate from future criminal liabilities.

Yet, its hardly possible for this decree to legalize human rights violations and result in error of impunity. This is because the constitution has provide protections for some of the fundamental rights, i.e. protection against cruel and inhuman treatment, equality and non discrimination, and arguably the right to life, by making them non- derogable even in the state of emergency.

Furthermore, unlike positivism, the current legal jurisprudence is towards revival of natural law theory where unjust laws couldn’t justify unreasonable actions. Accordingly, the decree will not serve its purpose legalizing human rights violations and nor will it be a defense for officials to escape from any criminal liabilities.

Of course, only the term ‘state of emergency’ and the fulfilment of some procedural requirements that make this decree different from the previous order of P.M which allowed the security forces to use ‘all necessary forces’ to crackdown the protest. Otherwise, the order of the P.M to use “all necessary force” has already allowed security forces to do what they cannot do, even in state of emergency.

Hence, considering these, the harshness of the actions of the security forces since the eruption of the ongoing protest and the people’s reactions thereof, this decree will not also serve its another purpose of prolonging the duration of the regime. So also the measure is too little, too late to restore peace and order in Ethiopia.

Many Thanks and Blessings to Swedish Company H&M - Geletaw Zeleke

‘The Struggle of the Oromo People & Its Movement’ | Audio