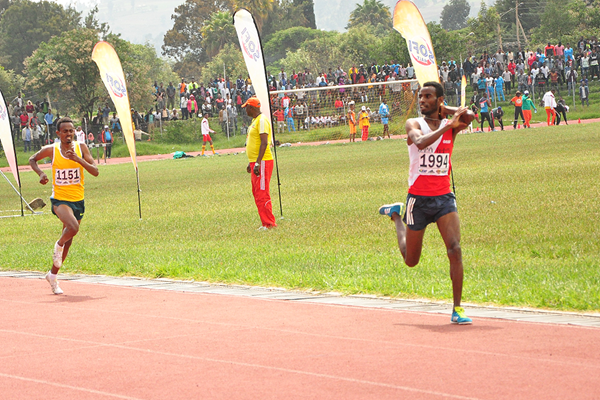 In other highlights from five action-packed days of competition to select Ethiopia’s team for the IAAF World U20 Championships Tampere 2018, Berihu Aregawi kicked off proceedings on the opening day with a strong finish to win the men’s 10,000m, Getenet Wale won the men’s 3000m steeplechase in a stadium record, and Berhanu Soressa won a closely fought men’s 1500m on the final day of action.

The sprawling city of Assela, birthplace of Ethiopian distance running legend Haile Gebrselassie and 2013 world 800m champion Mohammed Aman, was the venue for this year’s Ethiopian Junior Championships as the country kick-starts its preparations for the biennial World U20 Championships in July.

With a place in Tampere on the cards, the men’s 10,000m set the tone for tactical matchups on the open day as the pack of nearly 20 athletes settled for a pedestrian early pace, averaging 76-second laps in the opening half of the race.

Things began to change at about the seven-kilometre mark when a dozen athletes pushed the pace at the head of the pack, dispersing both the timid pacesetters and those clinging on to some hope behind the pack.

The leading dozen became the fighting seven with three laps left. The race turned into a three-man contest in the last 600 metres with Berihu Aregawi leading early contenders Tsegaye Kidanu and Aliqa Adugna. Aregawi won the tight contest in 29:36.67, a significant improvement from last year’s Ethiopian Youth Championships where he finished seventh in the 5000m.

“I never expected to win,” said Aregawi. “With five laps to go, I just realised I have some hope. With three laps remaining, I was almost certain that I would win it because I could feel my energy. I prepared for a faster race in training. This one was a bit slow. I have never run abroad [outside of Ethiopia], but now I feel like I could in Finland.”

The men’s 5000m captured the spectators’ attention from the outset as the race got off to an explosive start. With two little-known runners setting the early pace and opening a gap at the front, the race turned into a game of catch-up as the chasers, earlier than they perhaps anticipated, quickened the pace to narrow the gap to the frontrunners.

The leaders were eventually closed down just after the halfway point as the pace settled down for two more laps. The pack started to stretch again three laps before the finish, but 10 men were still in contention for medals with 600 metres left.

At the bell, the crowd was on its feet in anticipation of a strong finish with Tilahun Haile, Milkesa Mengesha, Antenayehu Dagnachew and Tesfahun Akalnew all in contention for victory.

It was 2017 national 5000m silver medallist Haile who outpaced his rivals in the last 200 metres to stop the clock at 13:55.13 with Mengesha and Dagnachew coming home for the minor medals respectively.

“Knowing my competitors in the heats, I knew they would wait for me to take the first stride [in the finish],” said Haile. “After running two thirds of the race, I could feel the energy and freshness in me. Now I need to prepare for it [Tampere] both physically and mentally.

And in Assela, she further cemented her credentials as a star of the future with a convincing win in the 5000m in a four-race cameo that would also see her contest the heats and final of the 3000m and 5000m. In a bid to complete the double, she was pipped in the 3000m on the finish line by close rival Tsige Gebreselama in a pulsating finish.

Getnet Wale stole the hearts of many at the World U20 Championships in Bydgoszcz two years ago when he twice fell at the water jump before rushing home for bronze in the 3000m steeplechase.

That performance and an impressive outdoor season in 2017 earned him a place on Ethiopia’s team for the World Championships, where he finished ninth in the final.

His performances against senior opposition have continued to impress this season. Two months after winning yet another national title, the 17-year old was again dominant in Assela as he plots a return to the World U20 Championships.

All 15 starters in the men’s steeplechase stayed in close contact with each other until the last three laps. When they entered the final two laps, four athletes tried to breakaway, but it was Wale who emerged victorious on the final lap, stopping the clock at a stadium record time of 8:35.01 ahead of Takele Nigate with Amsalu Belay coming home in third.

Elshadai Negash with the assistance of Abiy Wendifraw for the IAAF

EPRDF & its predators of its own making