After virtual disappearance since the end of the ‘historic election’ of 2010 in which TPLF won 99.6 % of parliamentary seats, the National Election Board has once again resurfaced in the last few weeks in a bid to carry out the dirty job assigned to it by the TPLF for the upcoming general election. This time the Board resumed its client role by accusing Andinet and AEUP parties for violation of party rules in relation to the election of party leaders. It is an irony that the Board is attempting to enforce rule of law while it is an organ that willfully permitted the daylight robbery of the votes of millions of voters by TPLF in the last four general elections. 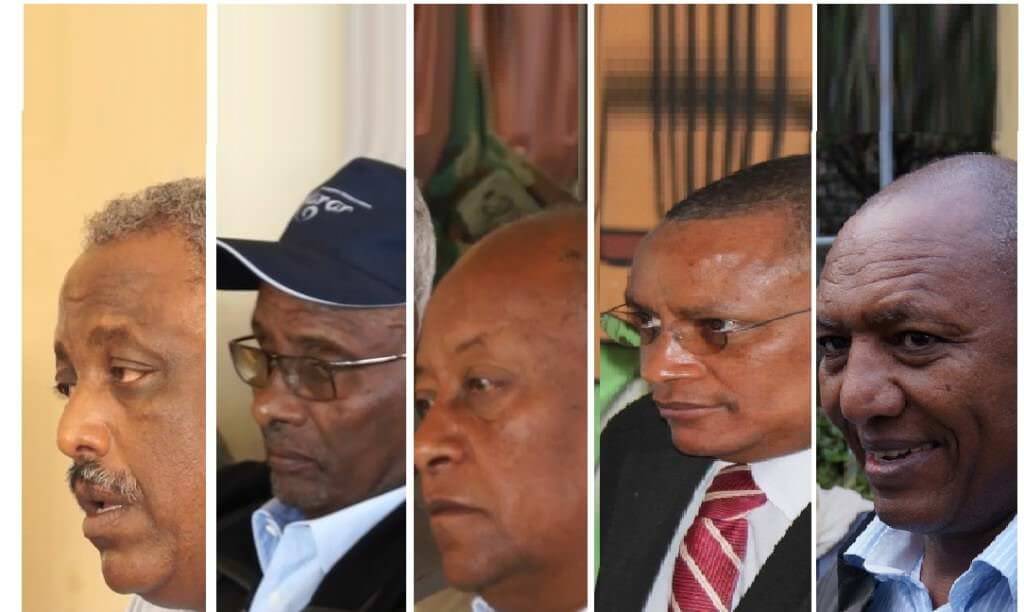 Those of us who have been closely observing the racist and mischievous political maneuvering in the last many decades, such dirty tricks of TPLF are quite familiar. What is not obvious is as to who in the Election Board are responsible for collaborating with TPLF to kill the hopes of millions of Ethiopians to witness competitive elections that ensures democratic transition in the country. The Ethiopian people and freedom lovers need to know who these TPLF clients are and what role each of them plays in carrying out the dirty job. When the appointed time for freedom comes and rule of the law reigns in the country, these individuals will be held accountable for the criminal activities they committed in name of overseeing and conducting elections in the country.

The Election Board consists of the Board and the Secretariat. The current Board consists of nine individuals who were nominated by the late Prime Minster and whose nomination was approved by the parliament. The members have different roles in the Board. Few of the members play a significant role in the unfolding drama orchestrated by TPLF while most of them have nominal and marginal roles. The first four individuals mentioned in the list known to have close connections with the TPLF power base and responsible for making major decision in the Board while the role of the other members is marginal and supportive. The other members not only approve the decisions supported by the four prominent members but also they do not regularly attend meetings.

1. Merga Bekana ( Chairman): Dr. Merga was born in 1957 in Horo Gudru of East Wellega zone. Dr. Merga has been a university lecturer for over 25 years at the Addis Ababa University Veterinary School. TPLF identified the opportunist and submissive nature of the person to serve its purpose. He accepted the nomination to the position at the Election Board in view of being relived from the teaching duty and receiving additional financial benefits. During the last ten years of his chairmanship of the Board, he has never been engaged in any serious teaching or research activities. He has now established a very close relations with high TPLF and OPDO officials. He receives instructions from security and party apparatus in the form of advises during informal face to face and telephone discussions. He is very committed to execute any instruction given to him by the TPLF inner circle. TPLF is masterful in identifying individuals such as Merga who have high academic ranks while lacking the integrity commensurate to their social status. Dr. Merga is the most important figure assigned by TPLF next to Dr. Addisu Gebre-Egziabher, who plays the ‘Tako’ role in manipulating Dr Merga.

2. Addisu Gebre-Egziabher (Deputy Chairman): Dr. Addisu was born in 1972 in Adigrat, Tigray. He is currently working as Department Head at the Ministry of Federal Affairs. Since Dr. Addisu is affiliate member of TPLF, he is the most important figure for executing the agenda of TPLF in the Election Board. He is a close friend for most of the Central Committee members of TPLF. His role in protecting the interests of TPLF during the 2005 rigged election was instrumental. Currently, most of the agendas of the Board comes through him and presented to the other members as legitimate issues to be addressed by the Board. He is the right hand person for TPLF expected to play an important role in protecting TPLF’s interests during the upcoming election in May.

3.Mohammed Abdulahi Hussein. Dr. Mohammed was born in 1970 in Negele Borena, Oromia region from Somali parents. He is working as a lecturer at the Ethiopian Civil Service University. He is well connected with TPLF officials since the 1990s when he was recruited to become a student at the Civil Service College. His wife is also a senior member of the party administering the Somali Regional State. She was Minister of Federal Women Affairs office between 2005 to 2009. Dr. Mohammed plays a significant role in the decision making process of the Election Board though he is not publicly seen with the chair and deputy chairs of the Board. Given his close connection with the power base for several years, he is a vital figure to carry out the dirty job assigned by TPLF to the Election Board.

4. Tegene Getaneh Kifle: Tegene was born in Mettu, Illubabor Zone of in 1961. He is currently president of the Federal Supreme Court. He was one of the seven members of Gambella violence inquiry commission, in which he served as Secretary. The Gambella inquiry commission was established to probe the violence which occurred in Gambella Region in December 2003. The commission finally ruled that the government did not use excessive force during the violence. His appointment to the presidency of the Supreme Court and membership to the Election Board linked to his loyalty to The TPLF regime. His loyalty was approved by TPLF operatives in the justice system such as Menebretsehay Tadesse( former president of the Supreme Court), Medhin Kiros( vice president of the Supreme Court and former commander of TPLF) and Desalegn Berhe ( President of Federal First Instance Court). Currently, he is well connected with senior TPLF operatives and he is known for his soft behavior and willingness to perform any duty assigned to him by TPLF.

5. Fikremariam Bereded Samuel : Fikremariam was born in Addis Ababa in 1963. His role in the Election Board is minimal but has close links with TPLF operatives. He largely operates under the shadow of the top four members.

6. Mulu Abate Hassen: Mulu was born in Addis Ababa in 1971. She work as auditor and accountant in a government department. She was not initially well connected with TPLF operatives. In the last few years, she has become close to top TPLF officials. She generally support the issues and decisions addressed by the top four members.

7. Zinare Mamo Haile: Dr Zinare was born in 1964 in Gidolo in Southern Region of Ethiopia. He has worked as teacher, church leader and served in various non-governmental organizations. Though his role in the decision making process of the board is minimal, he has close contacts with TPLF operatives.

8.Anley Haile Kassa: Anley was born in Debremarkos, Eastern Gojam in 1958. He worked at Ethiopian Press Enterprise in various management positions. He has close ties with TPLF operatives particularly with the Amhara National Democratic Movement( ANDM).

9. Alamirew Kebede Wondafrash : Dr. Alamirew was born in Bale Goba in 1949. He has several years of experience in teaching. His role in the decision making process is not significant though he is enthusiastic to perform TPLF’s agenda.

(10) Nega Duffisa, Head of the Secretariat of the Election Board. He was born in Wollega and worked as a judge at the Oromia Regional State Supreme Court. After relived from his work at the judiciary, he was recruited by OPDO senior officials to head the office of the Election Board. His soft and submissive behavior greatly favors the TPLF’s intention to manipulate the upcoming general elections

Speaking up for Ethiopia in Rio [Toronto CNW]

Ethiopia is an outlier in the Orthodox Christian world

DC’s “Little Ethiopia” has moved to Silver Spring and Alexandria