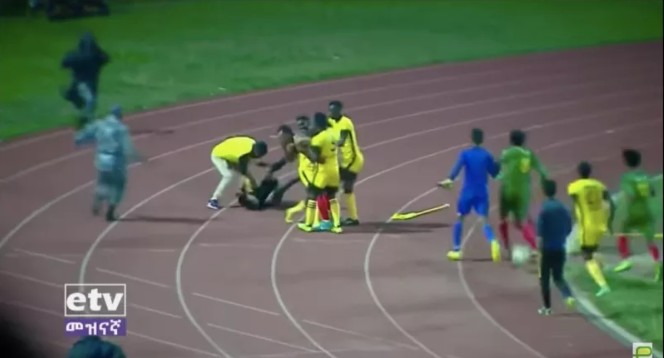 Video replay in soccer sucks, but goal line technology is great. The biggest advocate for the introduction of this tech in Ethiopian soccer is probably the referee of this weekend’s Defence Force vs. Welwalo Adigrat match, since it probably would’ve saved him from getting fed this fist sandwich:

As the video shows, the ref awarded a close goal to Defence, which immediately inspired anger in the Welwalo players. The referee was so distressed while being surrounded by the irate players that he tried to scurry away, at one point even picking up the corner flag to protect himself with. Ultimately this kind soul was too sensible to actually whack his harassers with the flag, which freed up a Welwalo coach, who’d run over to the action from the bench, to take the ref to the ground and administer a stiff punch to the face.

According to the BBC, the match was postponed on the spot. Since then, the Ethiopian Football Federation suspended play around the entire league, and Welwalo fired the pugilistic coach. Hopefully during the break in play the league’s officials will see the light and bring in the technology that could’ve saved this ref from a sore nose.

Video-The Money Market in Somaliland is like Fruit-Vegetable Market

Why it is necessary to reject EPAs (free trade deal) with the EU !