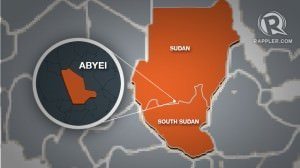 November 2, 2013 (ADDIS ABABA) – Ethiopian Prime Minister, Hailemariam Desalegn, said on Friday that his country will not recognise the recently conducted referendum to decide on the future of the Abyei region which is claimed by both Sudan and South Sudan. Hailemariam made the remarks while holding talks with visiting Sudanese Foreign Minister, Ali Karti. The African Union (AU) had proposed that a referendum be held in October but the two sides could not agree on who could participate in the referendum.

The Dinka Ngok who are resident in the area held a unilateral referendum at the end of last month, which saw over 99% of voters opt to transfer the oil-rich region back to South Sudan from where it was transfered for administrative purposes in 1905 during the Anglo-Egyptian condominium.

A senior government official who attended the meeting said on Saturday that the Ethiopian prime minister, who also is the current chair of the AU has made clear that it was the Ethiopian government’s and the continental bloc’s decision that a unilateral move to decide the fate of Abyei is unacceptable.

The AU has said that the vote was illegal further describing it as a threat to peace between Sudan and South Sudan.

According to outcomes of the referendum reveled on Thursday 99.98% of the Dinka Ngok voted to join South Sudan. However neither Khartoum nor Juba have recognized the poll.

During his meeting with the Ethiopian premier, Karti reiterated that his country won’t accept any unilateral actions taken to determine the fate of Abyei.

Since South Sudan officially proclaimed independence in 2011, the final status of Abyei is one of the key and sensitive issue that remain to be settled between the two former civil war rival neighbors.

Ethiopia has deployed 4,000 peacekeepers to Abyei as part of the United Nations Interim Security Force for Abyei (UNISFA), which was established in June 2011 just one month before South Sudan voted to secede from Sudan.

The two sides discussed the Ethiopia-Sudan Joint Ministerial Commission meeting, which is scheduled to be held in Khartoum next month as well as ways to further bolster bilateral relations.

A LARGE GENOCIDE IS HAPPENING IN ETHIOPIA

Ethiopia says ethnic clashes kill more than 20 in past week

Alemneh Wasse News: 70 Years Ago Today - The Horror of...