BY AUBREY HRUBY, OPINION CONTRIBUTOR THE VIEWS EXPRESSED BY CONTRIBUTORS ARE THEIR OWN AND NOT THE VIEW OF THE HILL 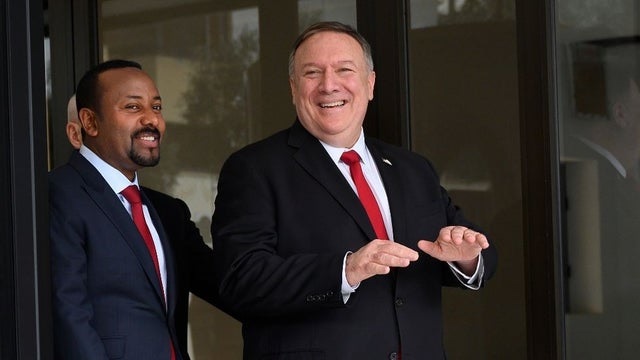 Over the last decade Ethiopia has sustained some of the highest growth rates in the world — averaging nearly 10 percent yearly growth since 2008. As its economy boomed, so did its population, becoming the second largest in Africa, behind only Nigeria, with a labor force that doubled in the last 20 years.

Located in the heart of the Horn of Africa, Ethiopia’s recent story stands in stark contrast to its neighbors in Sudan or Somalia. While civil and political unrest has not fully subsided and could increase in the lead-up to elections in August, Ethiopia has caught the eye of foreign countries and companies. It is one of the few remaining untapped telecommunications markets (two licenses are planned for award in April), and China and the Gulf region have invested billions, including big ticket projects like the China-backed $3.4 billion Ethiopia-Djibouti Railway.

With Prime Minister Abiy Ahmed’s reforms opening the door for increased United States engagement, the new Development Finance Corporation (DFC) announced plans to invest $5 billion in the next 3-5 years to counter Chinese influence and promote private-sector reform. As DFC launches into Ethiopia, they should look to lessons from the Marshall Plan to inform this new big push in American development finance.

In the lead up to DFC’s announcement, there has been considerable deepening U.S. government engagement in Ethiopia. In 2018, after the launch of Prosper Africa, the President’s Advisory Council on Doing Business in Africa visited Ethiopia as one of the four countries to focus on improving U.S. trade relations. In February, Secretary of State Mike Pompeo visited Ethiopia during his first Sub-Saharan Africa trip as Secretary, and promised increases in aid and a focus on growing the private-sector. In further recognition of Ahmed’s reforms, the Millennium Challenge Corporation announced that Ethiopia, previously ineligible, was selected for a threshold program currently underway; yet another avenue by which the U.S. will look to support private-sector growth and reform.

Given the goals of U.S. investment in Africa, the Marshall Plan serves as a useful precedent for effectively increasing U.S. and local private sector investment and shoring up democracy and security. The Marshall Plan, passed in 1948 to send foreign aid to Europe in an attempt to limit Soviet influence following WWII, ultimately re-built Europe along pro-market lines. The stated goal of the Marshall Plan is a near perfect analogy to the current administration’s desire to curb Chinese influence in Africa. Through the programs created as a result of the plan, the U.S. provided dollars to European countries to purchase necessary food, machinery and industrial commodities, mobilized technical assistance to improve productivity, and offered guarantees to de-risk investments by U.S. firms.

Based on the success of the Marshall Plan, the DFC and the broader U.S. government should consider the following three recommendations for Ethiopian engagement: prioritize productivity, mobilize U.S. private sector expertise, and address foreign exchange (forex) constraints, while committing to sustained interaction and investments.

The Marshall Plan had specific goals to increase production, trade, and stability. The DFC should assess investment opportunities on their capacity to increase productivity in Ethiopia, a core metric for economic growth. Ethiopia’s investments in growing its textile industry focuses on the low-end of the value chain, a move that highlights Ethiopia’s ability to be an alternative manufacturing hub to China given its cheap labor and power. However, the average Ethiopian firm sells just $14,180 worth of output per worker per year, nearly half that of India and significantly lower than Kenya at $46,420. DFC should support technical assistance that is directly linked to productivity gains, just as the Marshall Plan focused on more than just modern machinery, but also management and labor efficiency. DFC can support growth in areas of U.S. competitiveness like telecoms and smart cities, but also other sectors like services, where productivity rates are naturally higher.

Mobilizing U.S. private sector expertise should be an integral part of DFC’s strategy as it provides needed services and global relationships to Ethiopian companies and exposes U.S. industry leaders firsthand to opportunities in a fast-growing frontier market. During the Marshall Plan, a $5 million special fund financed sending 350 U.S. experts to Europe and bringing 481 Europeans to visit the U.S. All funds had to be used for projects that directly supported the goals of increased production and stability. Africa is home to about 400 companies with revenue of $1 billion; however, just 11 of those 400 companies are in East Africa, and African countries have fewer larger corporates than their global peers. Given Ethiopia’s potential to be a leader in manufacturing and a world-class tourist destination, U.S. expertise could go a long way in growing Ethiopia’s export market.

Apart from technical assistance, DFC can play a vital role in alleviating forex (FX) constraints to help grow and diversify Ethiopia’s export base. In September, the government announced the “Home Grown Economic Reform Program” to address Ethiopia’s forex availability, a long-standing impediment to economic growth. However, outside the agriculture sector more needs to be done to boost FX availability as many companies still face 90 day FX delays. The Marshall Plan provided guarantees to convert profit into dollars on American private sector investments in Europe to encourage American investment in European industry. The same model could be replicated in Ethiopia and provide the country with needed foreign investment and capital.

Important to the success of the DFC’s new pledge to Ethiopia is finding a way to sustain commitment and momentum over multiple years, including ensuring that other parts of the U.S. government are supporting Ethiopia to boost regional security.

The U.S. military assistance budget since 2017 has not included Ethiopia; however, increasing aid to strengthen Ethiopia’s national capacity for conflict prevention would further reduce the likelihood of violence, providing needed reassurance for the private sector. The DFC is paving the way for a new era of U.S. investment in African markets — getting the big push in Ethiopia right will provide valuable lessons for a repeatable model in other fast-growing countries.

Aubrey Hruby is co-founder of the Africa Expert Network, senior fellow at the Atlantic Council and co-author of ‘The Next Africa‘ (2015).

Al Mariam’s Monday Commentaries: A Eulogy for Brothers We Lost on June 22, 2019…