LONDON — When marathon silver medalist Feyisa Lilesa crossed the finish line at the Rio Olympics, he crossed his arms above his head in an “X”, a sign of protest against the Ethiopian government’s treatment of his people, the ethnic Oromo.

The champion runner did not return home after the Olympics, fearing for his safety even though the government said he would not be punished.

“[I knew] I would be jailed or killed if not, I would [never be allowed] out of that country and allowed to participate in any international competition or race at all,” Lilesa told the Thomson Reuters Foundation.

“I am quite sure those things would happen to me,” he said in a Skype interview from Rio, where he has been staying since Monday when the rest of his teammates returned to Ethiopia. 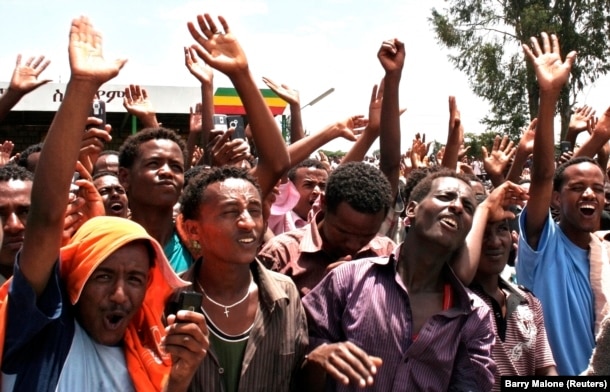 The Oromia region, home to more than 25 million Oromos, has been riven by unrest for months over land rights and allegations of human rights violations.

Lilesa, 26, is one of thousands of Ethiopians estimated by activists to have left the country amid a security crackdown on demonstrations sparked by a conflict over land-use policies.

Human Rights Watch estimated 400 demonstrators were killed by security forces between November and June during protests triggered by government plans to include some parts of Oromia within the capital Addis Ababa’s limits.

Up to 100 were shot in a single weekend in August when security forces also shut down the internet for 48 hours, according to activists.

Thousands more have been arrested, including the prominent Oromo activist Bekele Gerba, who was taken from his home in December.

The government, which disputes the death toll and says the protests are being staged illegally, stoked by rebel groups and overseas-based dissidents, did not respond to several requests by the Thomson Reuters Foundation for a comment.

Lilesa’s fear of being jailed upon his return home reflects the experiences of other Ethiopians who have spoken out against the government.

In the Greek capital Athens, 26-year-old Muaz Mahmud Ayimoo is staying in a cramped apartment with five other Oromo friends who are traveling with him. 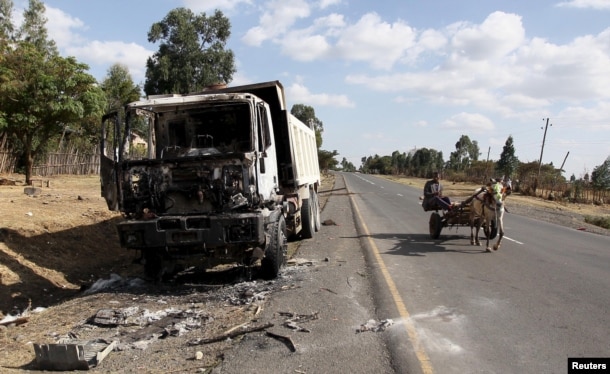 FILE – A man drives a horse-cart past the wreckage of a truck torched during recent demonstrations along the road in Holonkomi town, in Oromia region of Ethiopia, Dec. 17, 2015.

A student from Haro Dumal city in Oromia, Ayimoo was arrested by authorities and imprisoned for a month last November after he attended several non-violent protests along with fellow students.

Conditions for those detained were wretched and abuse was regular, Ayimoo said.

“They used to take us out one by one, torture us with electricity and beat us badly,” he told the Thomson Reuters Foundation.

Ayimoo’s family in Ethiopia paid a bribe for his release, later selling everything they had to get him to Europe.

“I can’t go back because I would lose my life,” he said.

Those in Athens are the lucky ones: Ayimoo’s wife and baby girl drowned in April after the boat they were on crossing the Mediterranean from Libya sank, killing hundreds, according to survivors.

“I could hear the screaming of my baby as I fell, I couldn’t save my family,” he said.

Other Ethiopians now following the unrest from abroad include the journalists of the Oromia Media Network, a dissident satellite TV channel broadcasting into Ethiopia in the Oromo language from Minneapolis in the United States, a city home to around 40,000 Oromo.

“We became part of the whole protester story,” said Jawar Mohammed, executive director of the network, which he said is watched by more than 11 million people in the Middle East and Africa at peak times.

Mohammed also regularly posts updates on his Facebook page, with more than 800,000 followers, about the unrest in his homeland.

Abel Wabella, 30, an activist who wrote for Zone9, a blog which focused on social and civic issues in Ethiopia, was imprisoned between April 2014 and October 2015 in what critics say was an attack on press freedom.

“I think the government is not ready for real reform the people are demanding right now. The people are tired of their false promises and will escalate their resistance,” he said.

US could sanction Ethiopia ex-Intelligence chief

Invitation to the press conference of 8th Citizens Continental Conference being held on the margins of the African Union Summit.

Ethiopia : What should be done for a Successful Political Transition?