With helicopters buzzing above, the annual Ethiopian-Jewish celebration gets underway on a promenade next to a flashpoint neighborhood overlooking Old City

I t was a distinctly celebratory occasion, current events notwithstanding. Despite a heavy police presence and the drone of helicopters overhead, several thousand people gathered Thursday for Sigd, the Ethiopian holiday marking their receiving of the Torah and immigration to Israel.

he main celebration was held Thursday along the stone paths and green lawns of Jerusalem’s Haas Promenade, part of a contiguous public park connecting the neighborhoods of Abu Tor and Jabel Mukaber and overlooking Jerusalem’s Old City and the Dead Sea

There are those who believe that Abraham was shown Mount Moriah from this spot, which is one of the reasons the Ethiopian Jewish community gathers there each year.

By 11:30 in the morning, most of the adults in the crowd — grandmothers draped in white; rabbis, or kesim, as they are known in Amharic, also in white and shielded from the hot November sun with red satin-and-fringed parasols; and scores of Ethiopian Israelis and other Israelis — were in place, listening to the prayers and blessings of the kesim, and then the greetings from Immigrant Absorption Minister Sofa Landver and President Reuven Rivlin.

The real action was happening below the promenade, on the long stretch of grass that overlooks the park’s olive groves.

Several organizations, including the Bnei Akiva youth movement; Insera, a center for Ethiopian Jewish Culture; and Fidel, the Association for Education and Social Integration of Ethiopian Jews in Israel, had set up tents on the lawn, inviting the younger participants to hear and see examples of Ethiopian culture.

“If [the kids] are born here, they’re not tied to Ethiopian culture,” said Amara Betue, a counselor at Yemin Orde, a youth village for teens at risk, including 150 teenagers with Ethiopian backgrounds. “We take these kids, and make them connect to it. I have them tell me about their families, their parents, their stories. It’s their Ethiopian education.”

It’s not always easy, said Betue. He pointed to one group of teenagers sitting nearby, one with her hair dyed red, the others wearing so-called ghetto trucker hats, more familiar from the streets of New York than the Jerusalem Tayelet.

“They don’t always know which culture is theirs,” he said. “On a day like this, we may get them interested, but it’s not a given.”

Farther along, a group of young men threw themselves into air-defying flips and somersaults on a stretch of blue mats, surrounded by an appreciative crowd. Their group, Insera, is a combination Ethiopian band and circus, said Alefe Guade, one of the gymnasts.

“We did this together in Addis Ababa,” said Guade, who immigrated to Israel nine years ago and lives in Or Yehuda, near Tel Aviv. “Now we’re doing it here.”

“Here,” according to Guade, is Or Yehuda and Rishon Lezion, the two towns where most of the members of Insera live.

According to the Central Bureau of Statistics, the majority of Ethiopian Israelis live in the center and the south. Netanya has the largest Ethiopian community at 10,900, followed by Rishon Lezion with some 7,400; Beersheba with 7,100; Jerusalem with 5,900; and Tel Aviv with 2,300.

Most of the Sigd celebrants were bused into Jerusalem for the holiday, evidenced by the row of coaches parked on the street along the promenade and in the nearby lot.

According to Michelle Shelemay Dvir, the development director for Fidel, there were fewer celebrants than in previous years, probably due to the security situation in Jerusalem.

The Haas Promenade is located near several Arab and Jewish neighborhoods that have been the focus of riots and stone-throwing incidents. Jabel Mukaber, located at the far end of the park, was the home of the two assailants who killed four people at the Har Nof synagogue on Tuesday morning.

As the celebrations continued into the early afternoon, groups of teenagers ventured to the other side of the park, buying hamburgers, hotdogs and sodas from kiosks set up for the day, or even farther afield, to the neighborhood pizza parlor and hamburger joint located down the block.

No injera, wat or dabo were being offered, as the more religious celebrants were probably fasting, as is customary during the earlier part of the day. 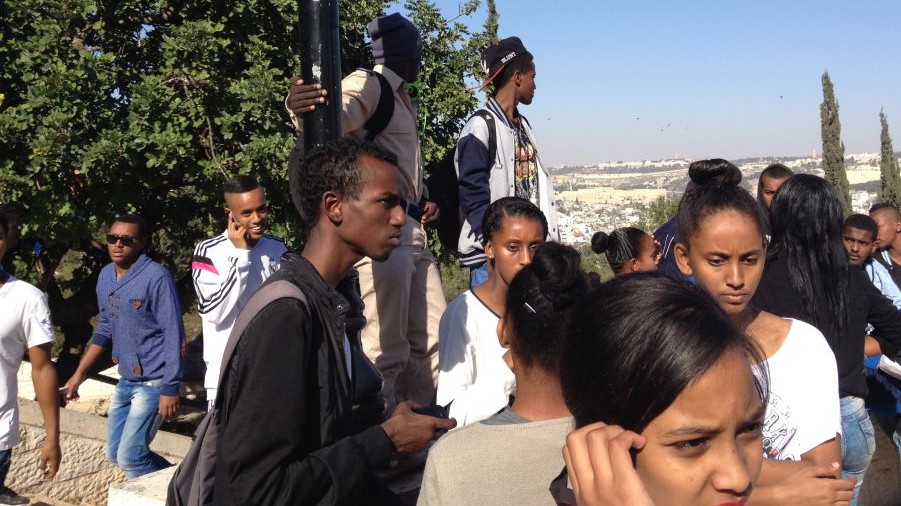 It seems, said Rabbi Sharon Shalom, a rabbi of Ethiopian origin who was speaking in a tent provided by the Education Ministry, that Ethiopian-Israelis are becoming better integrated into Israeli society.

He used his hand as an example.

“When you hold your hand up, the fingers are uneven, some taller, some shorter,” he said. “But when you bend them at the knuckle, they all look.

African Union Picks Ghanaian as Its Leader, in Snub to Sudan

Ethiopia: Trust in the Power of the People

Children jailed in connection with protesting the current regime

Tens of thousands take to streets in Ethiopia over abducted students