By Salem Solomon
V O A

WASHINGTON — Ethiopia is battling an outbreak of acute watery diarrhea (AWD) that has affected more than 32,000 people. At the same time, Ethiopia’s former minister of health, Tedros Adhanom Ghebreyesus, is a candidate to lead the World Health Organization.
The two facts are linked in that critics of Tedros say he has tried to minimize the outbreak by refusing to classify it as cholera, a label that could harm Ethiopia’s economic growth.The WHO’s 194 member states will gather in Geneva for a 10-day assembly starting Monday. One of their first tasks is to choose the organization’s next director-general.Tedros is one of three top contenders for the position, along with candidates from Britain and Pakistan.Lawrence Gostin, director of the O’Neill Institute for National and Global Health Law at Georgetown University, told The New York Times that Ethiopia has a long history of downplaying cholera outbreaks, and the WHO could “lose its legitimacy” if Tedros, who is also a former Ethiopian minister of foreign affairs, takes over the leadership of the organization.“Dr. Tedros is a compassionate and highly competent public health official,” he told the Times. “But he had a duty to speak truth to power and to honestly identify and report verified cholera outbreaks over an extended period.”But others have risen to Tedros’ defense. Tom Frieden, the former director of the Centers for Disease Control and Prevention, said the controversy over naming the outbreak is overblown. “During the time that Tedros was health minister, it would have not made any difference,” Frieden told VOA.

Ethiopia has been accused of covering up three cholera outbreaks during Tedros’ tenure as health minister.

Declaring cholera would not have changed Ethiopia’s response to past AWD outbreaks, according to Frieden. In fact, he says, avoiding the cholera label has not been irresponsible but rather a necessary compromise.

The literature on AWD and cholera shows that treatment is the same. It calls for hydrating the patient, chlorinating water and improving sanitation. In fact, the WHO uses the terms interchangeably in their teaching materials on how to deal with an outbreak. 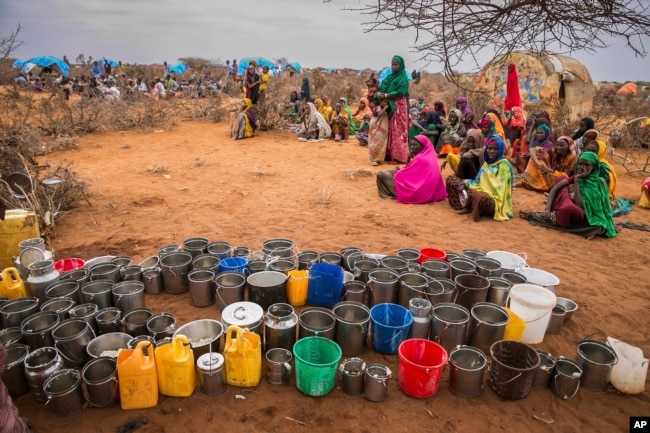 FILE – People wait for food and water in the Warder district in the Somali region of Ethiopia, Jan. 28, 2017. The consumption of contaminated water from shallow wells and ponds meant for cattle, poor nutrition and unsafe hygiene practices have led to outbreaks of cholera and acute watery diarrhea in the impoverished African country.

Lately, the development of cholera vaccines has brought the value of identifying the bacterial disease to the fore, said Frieden. “At this time, all African countries that report acute watery diarrhea should be rapidly doing lab confirmation and, if it’s cholera, considering the use of cholera vaccine in the response,” he said.

In the current outbreak, Ethiopia’s Somali region has been hit the hardest, with 768 deaths since January, according to a WHO report published May 12. Almost 99 percent of the deaths and 91 percent of cases are in the same region.

The WHO representative to Ethiopia, Dr. Akpaka Kalu, says the government is right to call it AWD because regional health centers do not have the capacity to test every case.

If all cases are treated as cholera, the disease has the potential to spread more quickly when children who do not have it are brought into cholera treatment centers, Kalu said.

“We know, biologically, malnutrition causes diarrhea. Now, if you admit that child into a cholera treatment center, you’ve actually turned that center into a cholera transmission center,” he said, speaking by phone from Addis Ababa.

Over the past six weeks, the response to AWD in Ethiopia appears to have been effective.

Kalu said his team, along with regional leadership and government officials, have focused on prevention and intervention. They have instituted community-based surveillance to monitor the regional drought in general and AWD in particular, and there has been a drop in reported cases.

“We have evidence the average number of cases [dropped] from over 600 a day to about 54 a day,” he said.

Kalu argues that early interventions are getting results and doesn’t think that vaccinating 6 million people in the Somali region is feasible.

He says Ethiopia is now preparing to prevent outbreaks from spreading to other parts of the country such as the Afar and Amhara regions as the rainy season approaches.

“We need to enhance preparedness because, as the rains come, usually what happens is the rains wash and enter the water bodies including where there is open defecation,” he said. “That’s how water bodies get contaminated and people use the water and become sick. So there is a need, our focus is to build capacity to be able to detect and contain so that it doesn’t spread.”

US Congresswoman Calls on Eritrea to Release American