Ethiopia’s new Prime Minister Abiy Ahmed paid a visit to a hotbed of anti-government protests Wednesday, asking residents for patience as he works to bring change to the Horn of Africa country.

Abiy is the first prime minister to come from Ethiopia’s largest ethnic group the Oromo, who spearheaded more than two years of unprecedented protests against the country’s one-party government that left hundreds dead. 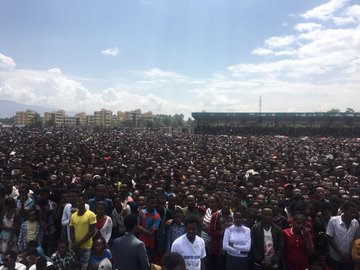 In the university town of Ambo — a flashpoint for the protest movement — Abiy was welcomed by dozens of horsemen adorned in traditional Oromo attire and cheering crowds, composed of the same young people who made up the ranks of the protesters.

Speaking just over a week after his inauguration to a surging crowd of thousands that police struggled to restrain, Abiy hailed the protesters, known as Qeerroo, as the “shield of the Oromo people”.

“We are now on the path of change and love,” Abiy said, appealing for patience from the residents of Ambo, 120 kilometres (75 miles) west of the capital Addis Ababa.

“I ask you to give us time … to take organised action,” he said. 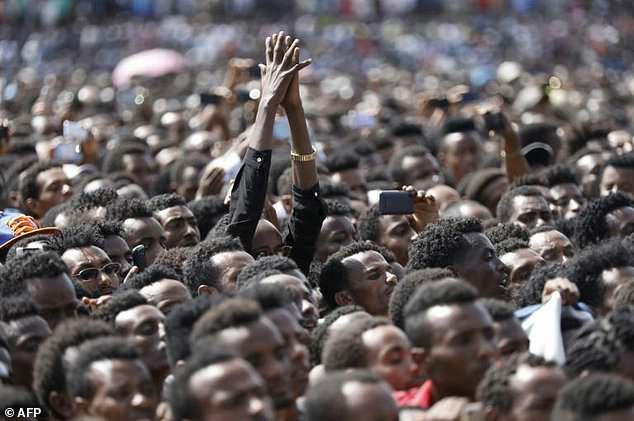 Addressing the rally in Ambo, west of Addis Ababa, Abiy referred to young Oromo men who led the at-times violent protests and enforced strikes in Oromia as the “shield of the Oromo people”

“We want to work hand-in-hand with you. What we say and what we do must match.”

The direct appeal to protesters stood in stark contrast to the situation in Ambo a year ago, when protesting students so feared voicing their opinions in public that they would only meet with journalists in an empty field outside of town.

“This is the first time the most powerful person in Ethiopia visited Ambo. The other leaders didn’t like to visit because they were afraid. He broke that tradition,” said Ambo resident Almaz Bulcha.

A 42-year-old former minister of science and technology, Abiy rose to prominence as part of a group of Oromo politicians within the all-powerful Ethiopian People’s Revolutionary Democratic Front (EPRDF), who reached out to the protesters.

He was chosen to lead the party, which has been in power for 27 years, after former prime minister Hailemariam Desalegn announced in February that he would step down, a surprise move that analysts believe was partially driven by his inability to quell the anti-government sentiment.

Under Hailemariam, the government imposed a 10-month state of emergency to halt the violence in Oromia and the neighbouring Amhara region.

But anti-government sentiment remained strong among both ethnic groups, which together comprise 60 percent of Ethiopia’s population and resent what they see as the over-representation of the Tigrayan minority within the ruling regime.

It is unclear how much of a factor Abiy’s entreaties to the protesters and his Oromo ethnicity played in his appointment as prime minister.

Since Abiy’s inauguration, 11 high-profile dissidents arrested last month have been released from jail and internet service has been restored in the countryside after a months-long shutdown.

Last week, he paid a fence-mending visit to the southeastern Somali region, which saw clashes last year between Oromos and Somalis along their shared regional border that killed hundreds and displaced a million people.

However a state of emergency imposed after Hailemariam’s resignation has yet to be lifted and all eyes are on the new premier’s next moves.

“As a young man, I’ve never heard of an Oromo being leader of Ethiopia,” said university student Dejenu Taye. “Being a leader is not enough. I’m now looking forward to him keeping his promises.”

Walias of Ethiopia eliminated from CHAN

OPDO is neither the the cause nor solution for the political crisis ...

Ethiopia just pardoned political prisoners. Could that signal a shift to real democracy?

A Country of Make-Believe Economics – By Aklog Birara (Dr)

Was OLF tipped off by the authority that Dr. Ambachew and General Asaminew would be killed and claiming Wollo is part of North Oromia?