Ethiopia’s parliament will meet on Friday to decide whether or not to extend the state of emergency imposed since October last year.

Originally imposed for a six-month period, the state of emergency is in its tenth month after it was extended by four months upon the first expiration in March 2017.

The move was occasioned by spreading anti-government protests in the Oromia and Amhara regions of the East African country. A local news portal, the Addis Standard launched an appeal to MPs to end the state of emergency. 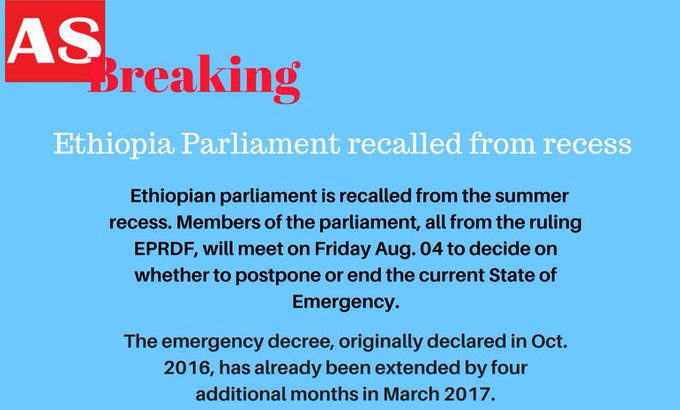 Since January 2016 the human rights situation in Ethiopia has stagnated according to a Human Rights Watch reports which said security forces have killed more than 500 people during protests over the course of 2016.

The government reported mass arrests of persons believed to be behind the protests, some have been released after training whiles others have been arraigned before the courts on offences of destroying private and public property.

The Command Post administering the curfew has reported that relative peace has returned to the country, consequent to which most stinging restrictions under the state of emergency were lifted.

The United States United Kingdom maintained their travel advisories for Ethiopia even though some European countries have lifted theirs with the ‘return to peace.’

Days after the imposition of a six-month state of emergency by the government, the Prime Minister, Hailemariam Desalegn, said the government was committed to broad-base political reforms. The European Union chief and German Chancellor all weighed in for such efforts to be all inclusive.

The government in November 2016 announced a cabinet reshuffle which saw the appointment of two Oromos – the ethnic group behind agitations in one of the protest regions – to cabinet positions of Foreign Affairs and Communications.

Who draws the boundary of Ezekiel’s Sovereign Nations and Nationalities?

Technology, Science and Democracy: Why care about their Synergy?

Ethiopia Under US, WB Pressure to Sign Colonial Treaty

Commentary response to article: The Nile Conflict: Compensation rather Than Mediation