Addis Abeba, October 31/2018 – A national campaign dubbed “ጀግኒት” (Jegnit), loosely translated “She, the Brave One”,was launched yesterday at the Hilton Hotel in Addis Abeba in the presence of senior women officials and other invited guests. The launching ceremony was attended by most of the recently appointed women ministers including Mufarihat Kamil, the Minister of Peace. The program, which is launched by the ministry of women’s, children’s and youth in collaboration with various stakeholders, is expected to kick off on November 4, 2018.

Jegnit is aimed at creating a movement of women networks with the major goal of fostering the culture of peace in Ethiopia so as to ensure the protection of women and children, where the case is evidently meager by far. The launching event brought together nine political leaders in the cabinet of PM Abiy Ahmed (with the exception of Dagmawit Moges, minister of transport), leading women artists, and other leading public faces to rally around the campaign, which will be advocated through a series of peace-conferences bringing women representatives from all the nine regional states and two city administrations together.

“Every ministry led by women should give the utmost attention to peace. They need to stand [to ensure that] the vulnerability of women in social equity and violence on the unprivileged groups is not a case in the country,” Yalem Tsegaye, minister of women’s, children’s and youth, said during the event, adding that “It is crucial to lead (the reform) with access to quality multi-sectoral services, inclusive to women and children, is ensured.” 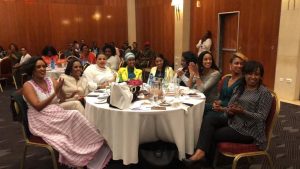 By the end of the peace-campaign a network of women is expected to be established aimed at giving a flavor of strength to the stakeholders working on women and children in the country. Said to be part of this advocacy and the later planned successful programming, the network will work through women who can make sustainable peace and cope with the recent reforms in the country.

“There is an untapped potential of women and young girls everywhere in this country, which we need to unlock. The approach to peace should include women together with multi-pronged approaches at different levels,” Mufarihat noted.

The women-led peace conference will have a leading motto of *“She, the Brave One, Dreams, Plans and Accomplishes.”

Nearly half of the women in Ethiopia, 48% in 2016, have had no education, according to a report from the Demographic Health Survey of Ethiopia (DHS). According to a 2017 data from the Ministry of Health, 13% of adolescent women aged 15-19 are already mothers or pregnant with their first child. Women also constitute the highest number of victims in violence which gripped various parts of the country in the last six months alone. In her maiden speech at the joint session of the two parliaments, Ethiopia’s newly appointed President Sahle-Work Zewde promised to make the safety of women in conflict prone situations one of her top priorities as the first female president of the republic.

Does Dr. Tedros Adhanom have the requisite qualifications to become next WHO Director-General?