The leaders of Ethiopia and Eritrea have pledged to respect the ‘sovereignty, territorial integrity and political independence’ of Somalia, following a second tripartite meeting, held in the Ethiopian city of Bahir Dar.

Eritrea and Somalia normalised relations in July this, after over a decade of animosity fuelled by accusations that the government is Asmara was sponsoring terrorists fighting to topple the Somali government.

Ethiopia on the other hand, has also fallen foul of Somalia’s government, most recently, when it signed a port management agreement with the semi-autonomous region of Somaliland.

Somalia’s prime minister, Hassan Ali, while denouncing the deal for the management of Berbera port emphasised that ‘all those seeking to acquire ports and similar resources must deal with the federal government’.

The statement says the three leaders also welcomed the impending lifting of sanctions against Eritrea, saying it would enhance peace and development in the region.

The sanctions imposed by the United Nations in 2009 and 2011, were premised on Eritrea’s reported hostility and aggression towards its neighbours including Somalia and Djibouti.

Eritrea has since normalised relations with both countries and called for the lifting of what it describes as ‘illegal, unjust and unwarranted’ sanctions. 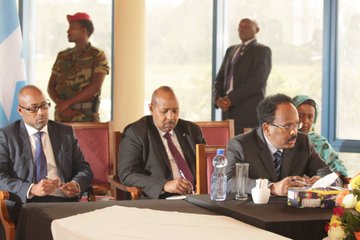 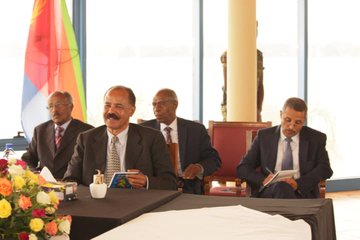 Office of the Prime Minister of Ethiopia@PMEthiopia

The joint declaration of by the Leaders of Ethiopia, Eritrea and Somalia ended with an agreement to hold the next tripartite meeting in Mogadishu.

commemorating the Ethiopian victims of the terrorists on Sept. 11th, 2001

Ethiopia: Justice for the Victims of the Meles Massacres of 2005!

Commemorating Yekatit 12: Remembrance of the Second Italo- Ethiopian War in 1935

The emperor who rooted out magic in medieval Ethiopia