Passions are understandably rising as election time, once again, draws nearer and nearer in Ethiopia.

This should not come as a surprise since the heating up of raw passions routinely accompanies elections elsewhere as well. What is distinctly Ethiopian is the fact that absolutist choices are inevitably pitted against each other during the upcoming elections, as has happened in previous ones.

In Ethiopian elections, it is not right or wrong policy proposals that confront each other, but supposedly absolutely “virtuous” and absolutely “evil” ones. Perhaps the underlying cause of offering electoral choices in such a starkly polarizing manner is the mentality of the Ethiopian elite, shaped by a long history of living under a succession of absolutist regimes.

What is disheartening is the refusal of the surviving members of the generation, entering its twilight years, to draw an appropriate lesson from their own disastrous recent history. One recalls how, at the end of the imperial era, political choices confronting the country were posed in a similar stark manner with catastrophic consequences.

Rival leftist parties with ostensibly competing platforms, indistinguishable to outsiders, demonized each other, eventually culminating in each other’s physical liquidation. The military merely embraced this approach to settling political differences spearheaded by civilian leftist parties and brought it to conclusion by eliminating the rivals that pioneered it. The ultimate outcome of this tragic policy was the loss of tens of thousands of lives.

Electoral choices have been offered as being between defending the status quo or working to revive its antecedent in most previous and present round of general elections in Ethiopia. This confrontation between the political status quo and the status quo ante has many shortcomings, including drowning out the voices of those aspiring to realize the next breakthrough in refining both democracy and federalism.

Those who envision Ethiopia as a single Amharic-speaking nation are absolutely convinced that a single Ethiopian “people” should be allowed to exercise its popular sovereignty by going to the polls every five years. And those who conceptualize Ethiopia as a “Nation of nations,” on the other hand, are similarly absolutely convinced that the Ethiopian “People is composed of numerous peoples.” For the political operatives in this sector, the exercise of popular sovereignty at the centre is the aggregation of the sovereignties of the various peoples constituting the Ethiopian People.

Elections clearly are not the appropriate mechanism for resolving these fundamental disagreements regarding Ethiopia’s nationhood and peoplehood. Forging a political order having the confidence of a significant sector of society is similarly not achievable at the polls. Forging such a consensus necessarily precedes and paves the way for the commencement of periodic elections.

Forging a democratic political order would fail as long as absolutist positions continue to confront each other, for democracy results from an impasse among competing elements of society, which requires hammering out a compromise. When a political order results from such a compromise, all contestants would have to learn to uneasily live with it because it does not perfectly match any sector’s favourite alternative.

Seeking and arriving at such a compromise democratic political order is possible only by subscribing to a couple of basic propositions. First, those seeking to preserve the status quo need to recognize that accepting some changes could serve such a purpose because the only thing unchangeable in human history is the inevitability of change. And second, those seeking change should similarly realize that preserving constructive aspects of the status quo could ease the process of bringing about change.

Hammering out such a compromise underpinning a democratic political order could succeed only through conducting protracted dispassionate debates by all stakeholders without resorting to the emotive posing of political choices. Here is where the obsession of Ethiopia’s political class with posing political choices in absolutist terms needs to be revised. All concerned could perhaps draw a lesson from the protracted and open debate that accompanied structuring the US as a successful federation.

In the meantime, the heated debate pitting those whose stand is the absolute defence of the status quo and those whose absolute aspiration is the revival of something akin to the status quo ante would likely continue. This binary configuration of debate, however, should not continue to drown out the voices of those wishing to work for the next breakthrough in refining both democracy and multinational federation. This is why it is necessary for those subscribing to this more responsible reformist position to make sure that their voices are heard.

—————— * This article was originally published on The Reporter, a Finfinne-based weekly newspaper, on March 14, 2015. ** Ob. Leenco Lata is the leader of the Oromo Democratic Front (ODF). 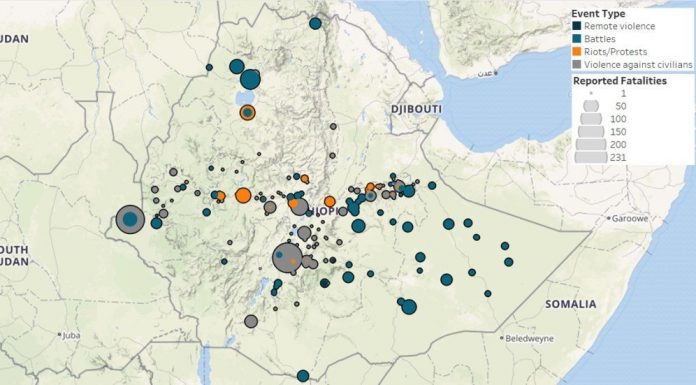 Ethiopia On The Brink? Politics And Protest In Horn Of Africa

We condemn the ethnic apartheid regime while applauding our heroes - ENTC

Module for History of Ethiopia and the Horn (of Africa) for...

ABOUT US
Ethiopian Registrar is an extensive Ethiopian news source. It contains political and cultural news, as well as country profiles and updated regularly. Please Visit us every time, we hope you enjoy it and welcome any feedback. Please send any comments and questions to us at [email protected]
Contact us: [email protected]
© 2012-2020-Ethiopian Registrar News/Breaking News: All Rights Reserved
Legal Seafood