In the World Health Assembly, unlike the narrow pool of voters in the WHO’s 34-member Executive Board, one vote for 194 nations each is more promising. If my past experience is any guide, there is better chance to prevail over dictators and hope for qualitative democracy in WHA in that regard!

One of the tribulations Africa has been suffering from is the fallout of the African Union (AU) becoming dictators’ club. All their efforts are geared toward serving dictators, not the people, be it as regards their health, education, justice, sense of security, the right to one’s peace even within the family. That is also we have been seeing, without any inhibitions, family members and allies of dictators making it, as does help the AU candidatures committee African states that strictly are dictator-run.

In 2017, Ethiopia is picked to become a member of the United Nations Security Council, after a great deal of horse trading between Ethiopia, Kenya and Seychelles for East Africa’s single seat. Especially Ethiopia and Kenya needed it. They both had a problems to remedy, both of them accused of repression, electoral thievery, and in addition in the case of Ethiopia state violence claiming the lives of tens of of students or citizens in a few hours at a time.

In 2015, while the media was writing about Pierre Nkurunziza’s preparations to tear the Burundian constitution, which prohibits third-term for a president, the African Group in Addis Abeba and Geneva picked Burundi to become member of the Human Rights Council (HRC). At the time, I tweeted my disappointment:

In October the UN General Assembly, on the basis of the AU’s recommendation, Burundi was elected a member of the HRC that has embarrassed Africa. 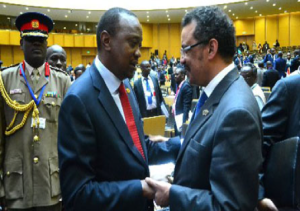 Uhuru Kenyatta and Tedros Adhanom in bosom brother mood, after the AU’s misadventure of adopting a resolution with Ethiopia’s help to take the Uhuru/Ruto case to UNSC to exonerate them for the 2007-2008 killings during Kenya election (Credit: Africa Review)

In 2013, TPLF-run Ethiopia embarked on the path of becoming the hired hand for Africa’s dictators to get the International Criminal Court (ICC) killed. They wanted to spare their friends – Kenya’s Uhuru Kenyatta, his deputy Willian Ruto and Sudan’s Al-Bashir – from international justice.

Surely, by so doing what the TPLF wanted to do is public knowledge. Since the TPLF is a coalition of murderers – as the world knows – they wanted to save themselves from international justice. Dr. Tedros Adhanom tried hard to deliver that. He did not have the skills nor the insight about the full implications of his actions. Therefore, he did not succeed. That is why the ICC, as an international mechanism for international justice, continues to exist, while in Kenya, as Kofi Annan feared, crime was rewarded, while families of the victims were left with nothing!

This is the coup d’etat of the Ethiopian foreign minister then, now the candidate to the top post at the World Health Organization (WHO), whom dictators still clinging in power love to serenade. 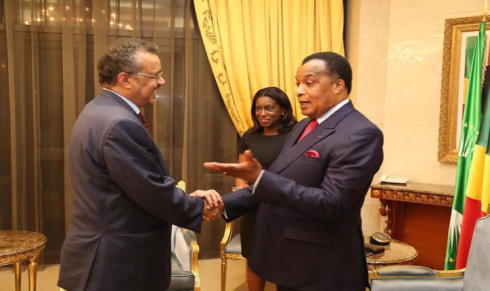 The Congo leader was President first from 1979-1992, while heading the Congolese Party of Labour (PCT). He returned with vengeance in 1997 to emboss himself as Congo’s president for life.

It shows he gives no hoot for his people and country. How could Dennis Sassou Nguesso care about who heads WHO, or about the state of global health? The answer is NO! Not at all. However, here he is giving assurances to Dr. Tedros Adhanom that he would be elected because he has Congo’s support, Africa’s support!

Congo happens to be member of the 34-strong WHO Executive Board, where states run by dictators prevail over others. This is a function of the growing alliances between African dictators. If anyone doubts this, whose strengths we witness now in the United Nations Human Rights Council, has failed to take note of a lesson or two dictators have taken from the alliances of democracies within the United Nations system.

Without any spicing of his remarks about qualifications or effectiveness of the WHO candidate or importance of the organization itself, the Congolese leader cryptically noted in French:

Dr TEDROS ADHANOM # Ethiopia sought the support of #Congo to his candidacy for the post of DG #OMS. @AlainAkouala @Thierry_mounga”

On November 15, 2016 Dr. Tedros jovially reacted to the Congolese leader’s support on his Facebook as follows: “With H.E. President Sassou Nguesso. Glad to have his strong support for my campaign.”

The international community must seriously be concerned with the health of children, mothers, all peoples, because of which nations of the world must pay serious attention to who they want to emplace as head of WHO in the election that would take place in about ten days time.

• The enjoyment of the highest attainable standard of health is one of the fundamental rights of every human being without distinction of race, religion, political belief, economic or social condition.

• The health of all peoples is fundamental to the attainment of peace and security and is dependent on the fullest co-operation of individuals and States.

• The achievement of any State in the promotion and protection of health is of value to all.

As part of the global community, if nations cannot do what needs to be done at the right time, in moments of Ebola or Zika, or future epidemics, the leadership that has not been placed to serve the best interests of the international community cannot be there for all of us.
★★★★★★
It is not only about and from the Congo’s president for life we take umbrage from. There is also President Joseph Kabila, who rules the Congo with an expired authority. unfortunately, as the TPLF in Ethiopia, his expired mandate has not stopped him from killing citizens that protest his unwelcome overstay in power. No Tedros Adhanom sympathizes with him, and possibly his WHO aspiration is not realized he might opt to work for any one of the dictators from Burundi, the Congos and a few other remaining dictators!

On the minister’s FB, there are 195 comments associated with this picture. One of them wrote:

“Birds of the same feathers flock together, Kabila is one African dictators who want to rule DRC for life! Shameless African tyrants”!

A fighter for global health: Who will be next to lead the WHO?

Why I am opposed to Dr. Tedros Adhanom becoming the ninth director-general of WHO! https://ethiopiaobservatory.com/2017/05/10/why-i-am-opposed-to-dr-tedros-adhanom-becoming-the-ninth-director-general-of-who/ … via @EthiObservatory

Why I am opposed to Dr. Tedros Adhanom becoming the ninth director-general of WHO

By Keffyalew Gebremedhin The Ethiopia Observatory (TEO)   For those who are pressed for time, they have my sympathy. As a retired person, I recall how that frays the nerves. My persuasion in o…

I recall in October 2013 at the third annual Desmond Tutu International Peace Lecture at the University of the Western Cape, former UN Secretary-General Kofi Annan observing:

“On a continent that has experienced deadly conflict, gross violations of human rights, even genocide, I am surprised to hear critics ask whether the pursuit of justice might obstruct the search for peace.” Annan strived to show the interrelationship between justice and peace. He laid the emphasis on one not being achievable without the other.

“We must be ambitious enough to pursue both, and wise enough to recognise, respect and protect the independence of justice,” he said.

“And we must always have the courage to ask ourselves ‘who speaks for the victims’?”

This is the question now awaiting the response of the World Health Assembly (WHA) at its 70th session – the right to health being recognized as a human right, as Principle 2 (cited above) has shown.

The biggest unjust thing the international community can do to itself is to put Tedros Adhanom in charge of our only World Health Organization (WHO) to make money for millionaire-investors and the international pharmaceutical industry!

If any member state of the World Health Assembly (WHA) has doubts about things I scribbled here, read my For Habtamu Ayalew’s sake & the many nameless TPLF-victims, Dr. Tedros Adhanom must finally show decency by withdrawing his name from candidacy for WHO director-general post!

If still there are some WHA member states unable to make up their minds about Dr Tedros Adhanom’s integrity, they may be advised to consult CNN’s Christiane Amanpour what she had learned from her interview with him in July 2015 during President Obama’s visit of Ethiopia. It is a revealing interview that says a lot about the Ethiopian candidate to the WHO director-general’s post!

.@specialreports While in dictatorial #TPLFpolitburo for several years,#DrTedrosAdhanom has at no time shown he has what it takes 2b a global health leader!

A proofed wrong strategy: ‘Kill the messenger, when you don’t like the Message’ in...

Call for TPLF to ban itself, the alternative is unsustainable, at best indefensible and...

An American Ally…Where Listening to Voice of America Was Just Banned?

At 10 she was airlifted out of Ethiopia. Now she shares her story around the Bay.