Ethnic tensions between Ethiopia’s two regions, Oromia and Somali erupted into violent conflict that killed at least dozens of people and drove thousands of men, women and children from their homes during the second week of September 2017.

Reports on social media about the death toll and displacement of people are wildly different depending on who reports them. Pro-government journalists based in the capital Addis Ababa reported dozens of deaths while diaspora-based media put the number much higher. However, both reported that thousands of people were displaced.

The longest border in Ethiopia is shared between Oromia and Ethiopian Somali region, which are respectively the country’s first and second largest administrative regions by area.

Tension has been simmering for years along this border which led to intermittent clashes involving mostly Oromos and Somalis.

In 1994 an opposition political party known as Oromo Liberation Front (OLF) accused the Ethiopian Somali Region of infringing into the south-eastern provinces of Oromia Region. OLF was eventually labeled as a terrorist organization by the Ethiopian regime. In June 2000, OLF reported that at least 70 people were killed in an armed conflict that ensued between Oromos and Somalis.

In December 2003, a violent clash over scarce water and land resources led to the displacement of 19,000 people in the border.

In 2004, the Ethiopian government held a referendum to settle the territorial dispute. The official results of the referendum gave about 80 percent of the disputed districts to Oromia Regional State.

But in December 2005, all hell broke loose when the federal government attempted to enforce the results of the vote. According to Relief Web International, tens of thousands of people have been displaced from both regions forcing the Ethiopian government to defer to transfer of the districts that have voted to be redistricted as part of Oromia Regional State. Things remained relatively quiet since then.

How did the latest conflict begin?

In April 2017, violent conflicts were reported in the southern border town of Moyale where members from both Oromo and Ethiopian Somali ethnic groups were killed. The cause of the violence again was scarce water and land resources.

During the same month, the Ethiopian government announced that the two regions have agreed to rearrange their boundaries per the outcome of the 2004 referendum.

This was when the conflict picked up and reached the level of violence that was last seen in 2005. Authorities and activists from both Oromia and Ethiopia-Somali started to trade accusations of unleashing paramilitary groups against civilians.

While most Oromo activists on social media refuse to view the latest conflict in ethnic terms, the civilians caught in the conflict are actually divided largely along ethnic lines.

Last week, at least 32 people were killed both in Oromia and Somali regions. Thousands of Oromos have been fleeing the Somali Region as they have come to be a target of violence.

What has the Federal Government done about it?

According to the state media, the Federal Government has stepped in to protect civilians. However, many see the government’s role with suspicion. Some even accused the government of deliberately stoking tensions and exploiting political fissures among different ethnic groups in the country to control the growing discontent in Ethiopia.

Over the last three years, thousands across Ethiopia mainly in the Oromia and Amhara regions rose up, demanding more political freedoms and social equality and a stop to government land grabs. The government’s response was swift and brutal which led to mass arrests and killings.

Member parties of the EPRDF govern four of the nine ethnically federated regional states; the remaining five states are administrated by the respective ethnic-based parties that share the same ideology with EPRDF albeit they are not part of the coalition.

Critics allege that since members of the TPLF are among the most high-ranking military officers who control the nation’s security they are the de facto rulers of these regions.

Many Oromos fervently blame the TPLF for manufacturing the conflict by pitting the Ethiopian Somalis against the Oromos. They are convinced that the conflict is the work of TPLF military personnel that are based in Somali region.

Other Ethiopians tend to blame Ethiopia’s ethnic based federal government structure that defined communities based on ethnic identity.

Meet the parties at the center of the conflict

The violence this year has created a bitter dispute between Somali and Oromo politicians on a scale not seen before.

However, Oromo opposition activists take their  allegation a little further by describing  ‘Liyou Police’ as an invading force that enjoy the overt assistance of Tigrayan military personnel. One of the primary demands of the protest that was held in  August 2017 was the removal of ‘Liyou Police’ from disputed districts in Oromia.

In fact, an accusation of such violence is nothing new for Liyou Police. Past reports of Human Rights Watch frequently mentioned the human rights violations allegedly committed by ‘Liyou Police’ such as indiscriminate killings, gang rapes, arbitrary arrests and maltreatment in Somali region 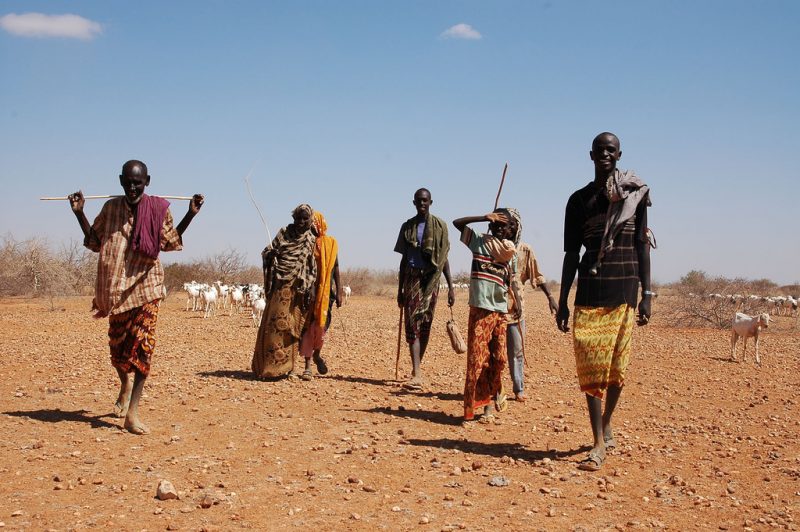 Pastoralists drive their goats towards Gode in Ethiopia’s Somali region. Photo by Andrew Heavens via Flickr. CC BY 2.0

From his early days as a leader of the ‘Liyou Police’, Abdi Mohamud Omar, or better known as Abdi Illey, eventually became the president of the region. Abdi Illey, a member of Ogaden clan himself, has helped the Ethiopian government to launch a crackdown against the insurgents.

On their part, OPDO officials have rejected the allegations and appealed to the federal government to prosecute the culprits.

Will the conflict stop anytime soon?

After weeks of trading accusations, the presidents of the two regions, Mr. Lemma Megersa and Mr. Abdi Mohamud Omar held a press conference in Addis Ababa, Ethiopia’s capital on September 17, 2017. Flanked by top federal government officials, they both spoke about the conflict in general terms.

They both insisted the need of stability in the area but they can’t seem to agree on the root causes of the conflict. For instance, while Mr. Lemma laid the blame at the door of unnamed individuals, Mr. Abdi implied that top OPDO officials are culpable for the conflict. They both clearly absolve the Ethiopian regime of any responsibility.

The problem is many Ethiopians especially Oromo activists believe that the Tigrayan-dominated regime is actively involved in the conflict. They allege that Ethiopian security officials, who have close ties with the region’s president, Mr. Abdi Mohamud Omar, have a vested interest in Ethiopian Somali Region.

However, both leaders seem to agree on immediately relocating the displaced people back to their homes.

But the conflict continues on the ground and even on social media where polarized rhetoric has generated not only confusion but also deliberate distortion of the real issues that caused the violence in the country.

REVEAL AGENDAS AND COME UP TO COMMON TERMS [by Tefera Dinberu]

Ethiopian People Must Condemn the State of Emergency by TPLF Government

Has Britain put liberty on trial by accusing a pro-democracy activist of terrorism? – Zerihun Zelalem

Like a Little Boy, Abay Tsehaye is Hiding behind Helen’s Skirt [By LJDemissie]

Ethiopia: The Day After… the Firestorm – Al Mariam