About 100 million people rely on coffee for their livelihood but they’re not always getting a fair deal, writes Killian Stokes.

WHEN WE THINK about the products on supermarket shelves, there isn’t a level playing field. Take wine and coffee for example.

As a result, more jobs, income and profits stay in France and France makes about €12bn a year from its wine exports.

At the same time, a big coffee-producing country like Ethiopia only earns €760m from coffee. Both are premium products, so what’s the problem?

Fairtrade has been fantastic for raising awareness but it was supposed to address this imbalance.

Fairtrade is marking Fairtrade Fortnight at the moment and after 20 years of Fairtrade products on our shelves in Ireland, has it achieved its aims of addressing poverty in developing countries?

Short answer? Not really. Fairtrade in the UK announced sales of £1.64bn this week for products with their certification. That gave farmers £30m in “premium payments” for their products. After 20 years of campaigning, that’s not a lot of added value for producers.

A Problem Worth Solving – A Look at Coffee 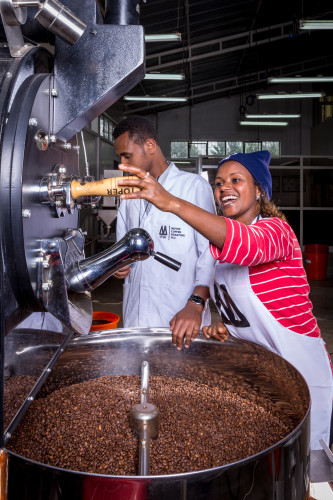 Agegnehu and Genet in Moyee’s Roastery in Addis Ababa, Ethiopia.

Coffee has become the world’s favourite drink. It’s bigger than wine, beer and booze put together. Each day we drink 2 billion cups of coffee and the global coffee industry is worth almost €100 billion a year.

Across the developing world about 100 million people rely on coffee for their livelihood, that’s the coffee farmers and their families. But these are amongst the poorest people on the planet. 90% of coffee farmers earn less than €2 a day while 90% of coffee growing countries still need international aid to survive.

Ethiopia, which I mentioned earlier, is the birthplace of coffee, the home of Arabica and the producer of some the finest beans in the world including Harrar, Sidamo and Yirgacheffe beans.

It is Africa’s largest producer of coffee, coffee accounts for 30% of its exports. 1 in 4 Ethiopians rely on coffee for their income. That’s about 20 million people.

Ethiopia should earn enough to power its economy, but as that value’s being added in the West, it has to rely on about €3 billion in foreign aid per year.

A Better Deal for the Coffee Belt – Trade over Aid 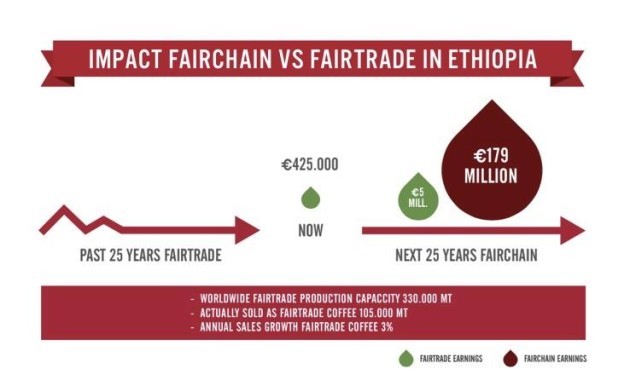 If Ethiopia started to develop its coffee industry, with roasting, packaging and quality control taking place at origin, it could create millions of jobs and triple the country’s income from coffee to €2.5 billion a year. It could begin to trade its way out of poverty.

At Moyee Coffee we call this approach FairChain. We now roast 85% of our coffee in Addis Ababa, as well as packaging and quality control jobs. By roasting locally, we create more jobs and ensure more profit stays with the people who contribute most to the coffee chain.

We think that’s an idea worth talking about this Fairtrade Fortnight. Let’s move the conversation beyond supporting farmers and look at supporting entire industries in developing countries.

We believe this FairChain revolution can spread throughout the coffee belt and make a real difference in the fight to tackle poverty.

Killian Stokes is an adjunct lecturer on Business and Global Development at the Quinn School of Business in UCD and the co-founder of Moyee Coffee Ireland (moyeecoffee.ie), the world’s first FairChain coffee.

Ethiopia faces worst drought in years as millions at risk