Ethiopia’s government, led by Prime Minister Hailemariam Desalegn, has contended with protests for nearly a year. The government’s efforts to quell the unrest have made headlines and drawn international criticism of late, but its problems go well beyond humanitarian concerns. Since the mid-1970s, Ethiopia underwent several periods of upheaval that changed not just the leaders of the country but also the political system and institutions that govern it. Now, with ethnic discontent reaching a new high and the tendrils of insurgency starting to re-emerge, Desalegn’s administration faces the greatest challenge to its rule yet.

The protests erupted over a land reform measure, but the roots of discontent go much deeper. Ethiopia’s Tigray ethnic population makes up just 6 percent of the country’s population, yet it enjoys disproportionate influence and representation in government institutions. When the Tigray-dominated government proposed to develop farmland predominantly used by the Oromo people, who make up 34 percent of the population, protests broke out across Oromo regions from November 2015 onward.

Eventually, the government decided against the planned reform, hoping that the protests would dissipate. Instead, protesters continued to turn out, driven by the imprisonment of demonstrators. Then, in recent weeks, the Amhara people — another large ethnic group, accounting for 29 percent of the population — joined in, and the focus of the protests shifted to demands for political equality and an end to the Tigray-dominated ruling coalition’s reign. The protests have now surpassed any grievances about specific legislation, or any specific law enforcement action. Instead, there is a rising resistance to the Tigray’s outsize power and enough pent-up discontent to challenge Ethiopia’s current government.

Together, the Oromo and Amhara are a more serious threat to Ethiopia’s leadership than the Oromo on their own. Furthermore, the Amhara people are more concentrated in urban areas than the Oromo, which has led to protests in population centers. Facing mounting dissent from two of the country’s largest ethnic groups, the government has attempted to suppress the unrest through force. During the weekend of Aug. 7, reports emerged that over 100 civilians had been killed in protests, which led to outcry over the Ethiopian security services’ brutal methods to control the demonstrations. Because the Ethiopian government exercises strict control over media activity in the country and restricts internet access, reports of what exactly happened are slow to emerge. But information from local hospitals suggests that another 100 civilians have been killed since that weekend; at least 55 of these deaths have been confirmed. The rise of urban protests has also led to greater media coverage of the turmoil, despite the government’s attempts to control information.

A History of Upheaval

Ethiopia is no stranger to political unrest. For many centuries the country was run by a monarchy, the Solomonic dynasty, whose rule ended with emperor Haile Selassie. In 1974, a military council brought the first regime change, installing a communist-inspired military council, the Dergue, to lead the country. Eventually, popular support for the new administration began to erode, leading to civil war. The Dergue’s most prominent officer, Mengistu Haile Mariam, tried to reform the Dergue into the People’s Democratic Republic of Ethiopia in 1987, but just four years later, several ethnic rebel groups overthrew the government. The Tigrayan People’s Liberation Front, led by Meles Zenawi, eventually gained control of Ethiopia and installed the element that rules to this day. 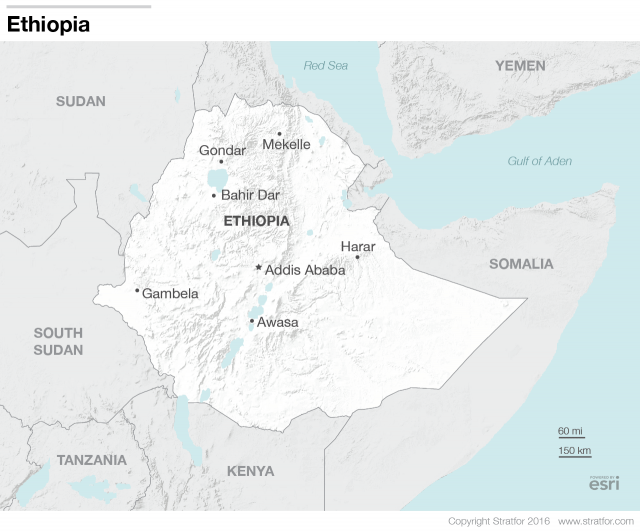 The government in Addis Ababa has been challenged before. Unlike the ongoing protests, however, previous uprisings such as the Ogaden rebellion were isolated to smaller ethnic groups acting alone, and the government dealt with them decisively and successfully. By joining forces across ethnic lines to oppose the ruling powers, the Oromo and Amhara present a more formidable problem for Ethiopia’s leadership. Additionally, under Desalegn’s rule, the government has faced internal unrest and may not be as strong as it was during Zenawi’s rule, which lasted until 2012. As the chairman of the Tigrayan People’s Liberation Front — the dominant party in the ruling Ethiopian People’s Revolutionary Democratic Front coalition — Zenawi led the fight against the communist government that preceded it and installed the Tigray-dominated government in Addis Ababa. His parliament consisted of fellow rebel veterans who had all fought and won together in the war against the Dergue, while Desalegn’s administration lacks the same unity and solidarity. The Oromo and Amhara protests will test whether the Tigrayan administration can endure without Zenawi.

At this point, the protests and limited rebel activity do not even approach the situation Ethiopia faced in the 1970s and 1980s, when the Dergue countered multiple severe rebellions. Nonetheless, given the size of the Amhara and Oromo populations in Ethiopia, the threat they present should not be taken lightly. As strong as they appear, the Tigray-dominated institutions in Ethiopia are not monolithic. And, because of their small number, the Tigray have had to co-opt members of smaller ethnicities (such as the Wolayta, from which Desalegn hails), and even the Amhara and Oromo, to serve in government and man the security forces. If opposition to the government increases along ethnic lines, the ruling elite or even Ethiopia’s security forces could fracture.

Since the bloody Aug. 7 weekend, protesters in some areas have turned to less violent forms of civil disobedience. For instance, in the Amhara city of Gondar — once the capital of an ancient Ethiopian empire — civilians have gone on a general strike, turning the city into a ghost town despite calls from the government to resume business as usual. Some reports even claim that local militia or rebel groups near Gondar have attacked convoys and bases belonging to the security forces. Though these incidents seem to be few and far between at this point, several latent insurgencies linger in Ethiopia, and growing ethnic dissent could rejuvenate and galvanize support for these simmering rebellions. In the past week, two rebel groups announced their alliance. If these groups increase their attacks, or if other groups join the movement opposing the government, the current administration could face a similar fate to the one it brought upon its predecessors.

The Oromo and Amhara protest movements could change the course of Ethiopia’s future, but it is not yet clear what the result of their uprising will be. A change of leadership could bring greater political freedoms, such as allowing outlawed opposition groups to take part in free and fair elections. On the other hand, it could also lead to prolonged conflict and instability. If the resistance against the government reaches critical levels, Desalegn could decide against an armed struggle and instead take political measures to liberalize or transfer power. Regardless of how this situation develops, Ethiopia’s Tigray-dominated government may not be able to sustain its hold on power for much longer. And though the current protests may be Desalegn’s first major challenge, they will likely not be his last.

Urgent message to my friends in Greater Seattle Area!!!

Breaking: US based OMN television team in route to Ethiopia to “explore opportunities” to open local branch offices. Addis Abeba